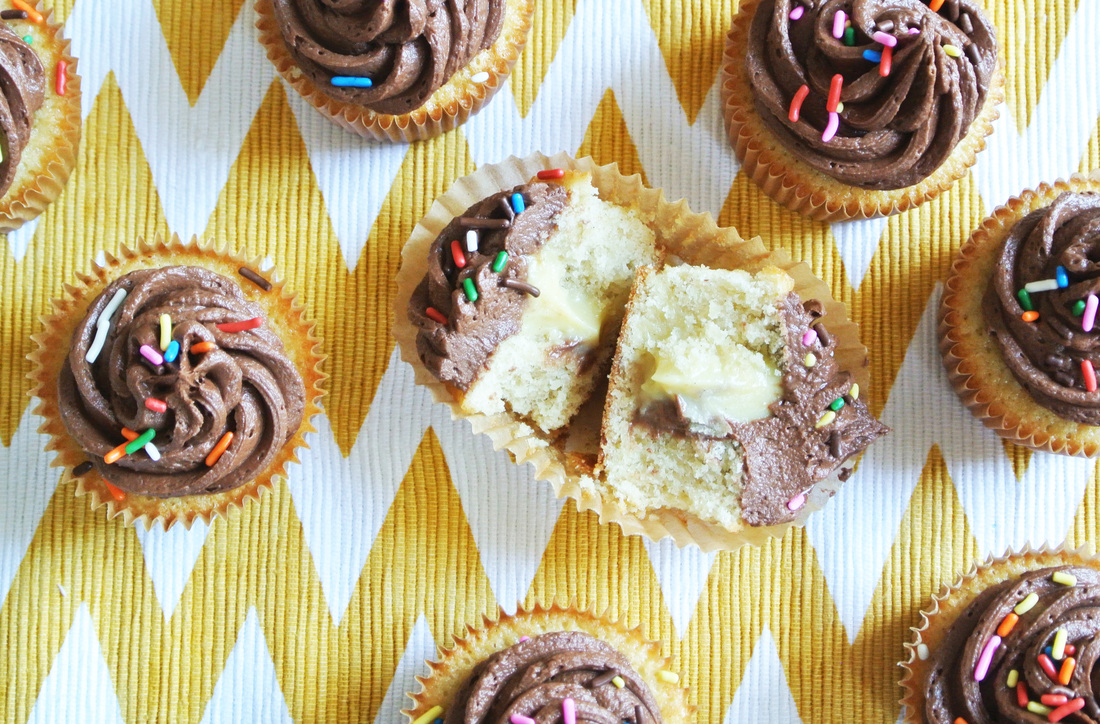 With National Donut Day occurring recently, I was almost overtaken with inspiration for new donut recipes. However, as much as it pains me to say it… I can only make so many donuts.

I really felt like baking something new, and I already had a new donut recipe planned for the big day (it should be on the blog soon!), so I decided to use the donut as inspiration.

One of my favorite types of donut is the chocolate-glazed cream-filled variety. I love the surprise of the cream as it gushes out of the center when you bite in. And the way the pudding-like consistency of the cream contrasts with the firmness of the donut. So, in my quest to bake a new treat (with donuts on the brain), I essentially turned the donut into a cupcake. 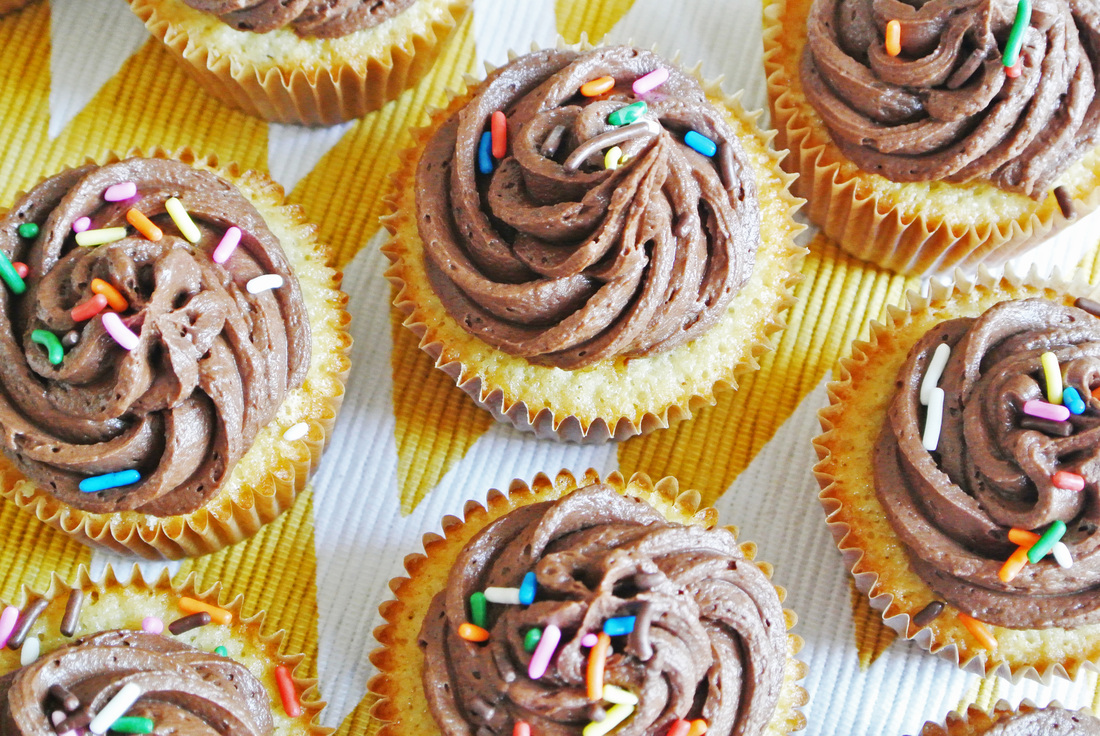 When developing this recipe, I wanted to put together what might be considered standard, or basic, baking foods -- vanilla cupcakes, chocolate buttercream, and pastry cream—but in a new, interesting way. Therefore, my goal was not to reinvent the wheel with the individual components, but rather to utilize conventional recipes for an unexpected treat.

One word of caution before you dive into making these cupcakes: This recipe has a lot of steps, which I’m usually not a fan of. But in this case, it is soooo worth it!

When I made them, I split the prep work in two to make the recipe more manageable: the first night I made the pastry cream and baked the cupcakes; the following morning I made the frosting and assembled the cupcakes.

The cupcakes turned out exactly as I had hoped—and the pastry cream center is such a nice surprise -- especially if you keep it a secret! 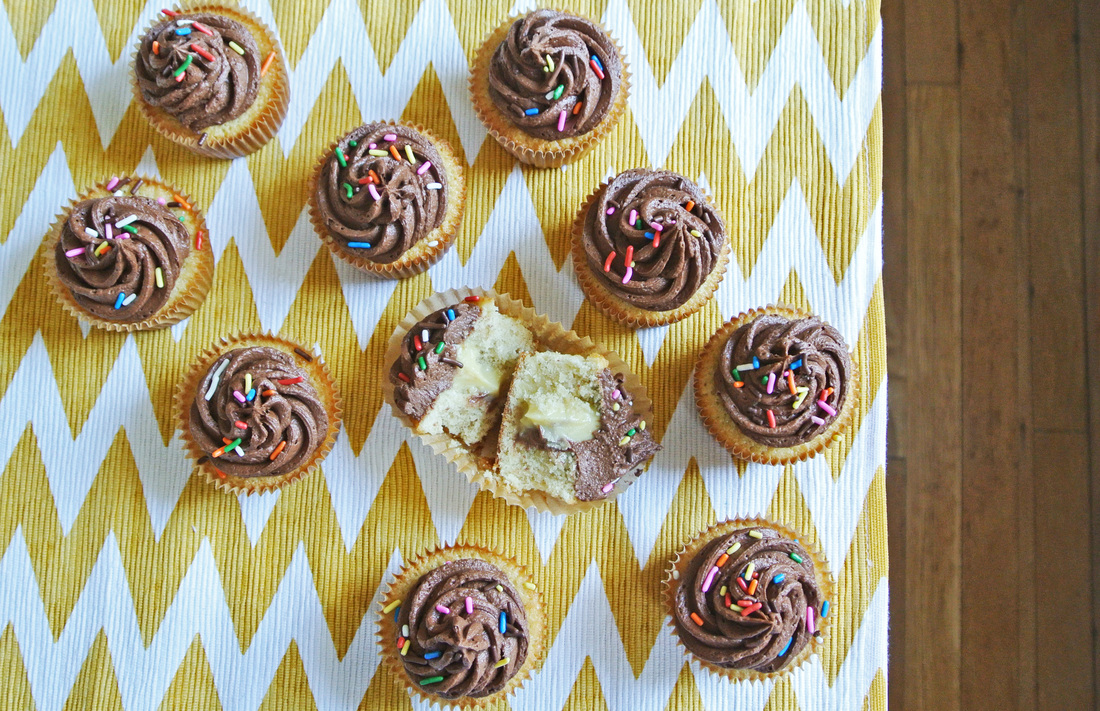 Ingredients:
Directions:
For the Cupcakes:

Preheat oven to 350°F. Place cupcake liners in cupcake pan and set aside.

In a large mixing bowl, combine the flour, baking powder and salt.

In a separate bowl, cream the sugar and butter until light and fluffy. Add the egg and egg white one at a time, mixing well after each addition. Add the vanilla and mix to combine.

Alternate adding the flour mixture in 3 additions with the milk in 2 additions. Mix until all ingredients are well combined. Do not over-mix.

Scoop the batter into the prepared cupcake pan, filling each liner ¾ full.

Bake for 20 minutes or until a toothpick comes out clean. While the cupcakes are baking, make the pastry cream (see below).

Remove the cupcakes from the oven and allow to cool completely on a rack.

For the Pastry Cream:

Mix the dry ingredients together in a medium-size bowl. Add the egg yolks and mix thoroughly until a thick paste forms and the ingredients are well combined.

In a medium-sized saucepan, heat the milk over medium heat until small bubbles start forming at the top. Remove the milk from the heat before it starts to boil.

When all of the milk has been added, pour the resulting pastry cream back into the saucepan and place over medium heat. Whisk the mixture constantly until the pastry cream turns from liquid to a thick consistency. This will take several minutes. Allow the pastry cream to come to a boil and remove immediately from the heat.

While the pastry cream is chilling, make the buttercream frosting (see below).

For the Chocolate Buttercream Frosting:

With a mixer, beat the butter until creamy. Combine and powdered sugar and cocoa powder in a separate bowl. Add the sugar and cocoa to the butter, 1/3 cup at a time, beating on medium-high speed until fully incorporated. Add in the vanilla and milk and beat for another 2-3 minutes, until the frosting is light and fluffy.

To Assemble the Cupcakes:

Once the cupcakes and pastry cream are cooled, create cores in the center of each cupcake with an apple corer. Make sure that the cores only go into the cupcake approximately 2/3 of the way (otherwise the pastry cream can fall out of the bottom).

Pipe the buttercream over the entire top surface of the cupcake and top with the sprinkles of your choice!